Why build a rooftop water tank in the shape of a Teletubby? Or go to the effort of installing a replica of the Eiffel Tower atop a semi-abandoned building?

It’s often difficult to explain the proliferation of unusual artwork dotting the vast urban belt of some 11 million people outside Argentina’s capital of Buenos Aires.

In this immense swath of tree-lined neighborhoods co-existing with areas of chaos — apparently built with little if any urban planning — many residents have erected grandiose, eyebrow-raising surprises.

The creators are usually construction workers or shop owners, although some artists are seeking to leave their signature in their neighborhood.

Pedro Flores defines the outskirts of Buenos Aires as a “post-apocalyptic paradise” close to the capital’s center. He and two friends run an Instagram account, “The Walking Conurban,” a play on the words “conurbano bonaerense,” as the roughly 40 municipalities are known in Spanish.

The page publishes images daily of these suburbs, often tinged with a bit of magical realism: a dinosaur on the dirt streets of a poor neighborhood; two Minions dolls greeting people from a home; a Statue of Liberty in the middle of a pasture.

Here are some of the works The Associated Press visited. A cardboard recycler pulls his cart past the home of Miguel Muñoz, where a replica of the Eiffel Tower, stands on a rooftop, elevated on a pile of bricks, in La Tablada, Argentina. (AP Photo/Rodrigo Abd)

On a rooftop at the corner of a street in the town of La Tablada stands a replica of the Eiffel Tower. Miguel Muñoz, 58, proudly explains how his father, a blacksmith, built it out of leftover iron with the guidance of brochures from the French embassy.

“He gave it to me on my birthday, that’s why I don’t sell it,” Muñoz said.

The tower is a symbol in the neighborhood. “I took it down once to paint it and the neighbors went crazy thinking someone had stolen it,” Muñoz said.

On the terrace of a two-story house stands a large water tank in the shape of a kettle, like the ones used by Argentines to make their beloved tea-like infusions known as mate. It was built in 1957 by Italian immigrant Victorio Smerilli and some relatives. 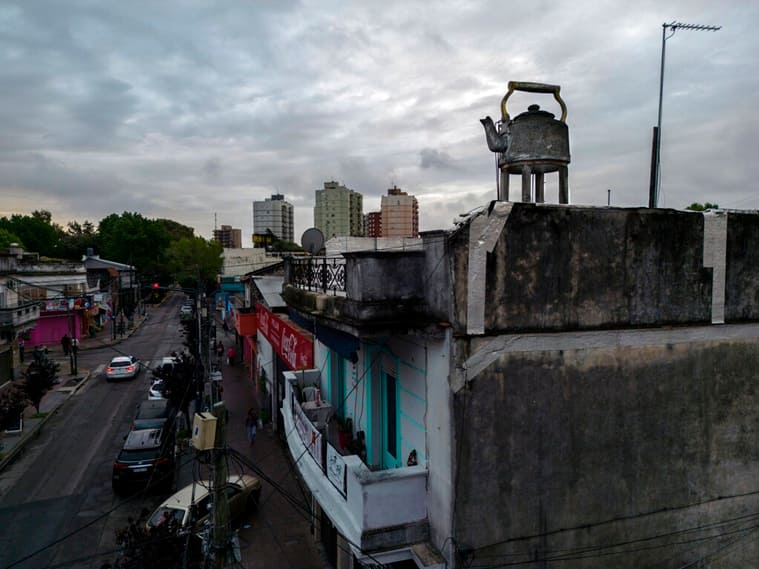 On the terrace of a two-story house stands a large water tank in the shape of a kettle, like the ones used by Argentines to make tea-like infusions known as mate, in the Villa Raffo neighborhood of Buenos Aires, Argentina. (AP Photo/Rodrigo Abd)

“They decided to do it as a replica of the ‘Victor’ kettle they sold in a store located downstairs in this same house,” said Gustavo Smerilli, the immigrant’s grandson.

Adriana Paoli runs an art workshop in the building and she is pushing a project to restore the kettle.

“If I say, ‘I have my workshop in the kettle,’ everyone knows the place,” she said.

In the municipality of General Rodríguez, behind a humble house, a replica of a Statue of Liberty rises above a field where horses and cows graze. Dogs frolic near a 49-foot replica of a Statue of Liberty, in General Rodriguez, Argentina. (AP Photo/Rodrigo Abd)

The 15-meter- (49-foot-) high structure is a leftover from the “Liberty Motocross” circuit operated there years ago, the caretaker of the property, Pablo Sebastián, said.

GORILLA OF THE BOAT HOUSE

Sitting peacefully on a rock, next to a door of a boat-shaped house in the town of San Miguel, the gorilla Pepe drinks from a mate gourd. The creator of the house and the gorilla statue is sculptor and painter Héctor Duarte, who died in 2020. A cement sculpture of a gorilla named Pepe with a cup of mate, is chained to a wall to prevent it from being snatched, in San Miguel, Argentina. (AP Photo/Rodrigo Abd)

Duarte’s family has received offers to buy the cement sculpture, but they refuse to sell.

BUSTS OF EVITA AND JUAN PERÓN

In the patio of the same house where Pepe the gorilla presides, Duarte’s busts of Juan Domingo Perón, three-time president of Argentina, and his wife, Eva María Duarte, can be seen embracing. A bust depicting Juan Domingo Perón, three-time president of Argentina, and his wife Eva “Evita” María Duarte, in an embrace, sits on a piece of wood atop a barrel, on the patio of the artist Héctor Duarte’s family home, in San Miguel, Argentina. (AP Photo/Rodrigo Abd)

Duarte’s family lends the sculptures out for official ceremonies.

The enormous water tank in Monte Grande’s main plaza became a work of art in 2020 when, at the municipality’s request, artist Leandro García Pimentel painted a mural on it depicting fire, earth, air and water. The water tank has become a meeting point and public ceremonies, and newlyweds pose in front of it for photos.

On a street in front of bricklayer Daniel Niz’s house, in the poor Sol de Oro neighborhood in Ezeiza, a dinosaur greets visitors.

“My son wanted a rubber (dinosaur) and it was expensive, so I decided to make this out of recycled things and materials,” Niz said. A dog walks past a sculpture of a dinosaur displayed in the front yard of bricklayer Daniel Niz, in the Sol de Oro neighborhood of Ezeiza, Argentina. (AP Photo/Rodrigo Abd)

He previously had the dinosaur on a patio inside his house, but he decided to put it outside so people could take photos of the 1.2-ton structure.

A water tank made to look like a large hand holding a soccer ball stands on the roof of a house in the La Cumbre neighborhood on the outskirts of La Plata, recalling the famous goal Diego Maradona scored with his hand against England in the 1986 World Cup . A water tank made to look like a large hand holding a soccer ball stands on the roof of a house recalling the famous goal Diego Maradona scored with his hand against England in the 1986 World Cup, in the La Cumbre neighborhood on the outskirts of La Plata , Argentina. (AP Photo/Rodrigo Abd)

It was designed by a deceased mason who was well known to locals.

COLOSSEUM, TOWER OF PISA and ARCH OF TRIUMPH

Replicas of these European masterpieces in the municipality of Ituzaingó were carried out by artist and architect Rubén Díaz, who is considered a “generator of fantasies.” Díaz’s goal is in part to let his neighbors “travel” to places they would normally never see.

The Colosseum, which is 200 square meters (2,153 square feet) and 8 meters (26 feet) high, recreates the Roman amphitheater.

The Argentine version of the Arc de Triomphe in Paris is 11 meters (36 feet) high and has the late comedian Carlitos Balá immortalized on one side. A replica of a leaning Tower of Pisa constructed by artist and architect Rubén Díaz, adorns a private garden in Ituzaingo, Argentina. Replicas of several European masterworks in the municipality were carried out by Díaz, who is considered a “generator of fantasies.” (AP Photo/Rodrigo Abd)

Meanwhile, the Leaning Tower of Pisa is located in the front garden of a private property. Díaz has proposed building the Great Wall of China in 2023.

Homer Simpson, the father from the TV series “The Simpsons,” smiles and holds up his thumb from atop the aluminum roof of a restaurant in the town of Ciudadela. On the front of the restaurant, which serves cuts of grilled meat, is the silhouette of Maradona running with a ball.

Po, the red Teletubby with the circular antenna, smiles as she surveys a long and busy highway. But Po isn’t just there for decoration — she is the lid of a building’s water tank in the town of Ciudadela. A giant head of Po the red Teletubby, transformed into a water tank lid, can be seen by motorists traveling along the General Paz highway, in Ciudadela, Argentina. (AP Photo/Rodrigo Abd)

Ignacio Castro, who rents the apartment just below the tank, said that when he was about to move in he found the head of the character of the famous children’s show in the kitchen. He gave it to his uncle, but the owner of the building demanded it be returned.

Also in Ciudadela, some 20 human-scale figures appear in a row in the entrance garden to the home of Antonio Ierace, an Italian immigrant who arrived in Argentina in 1949 and worked as a bricklayer. As a hobby, he designed statues dedicated to migrants, including a man carrying two suitcases, and homages to workers such as hairdressers and blacksmiths.

HOUSE WITH THE TRANSFORMERS 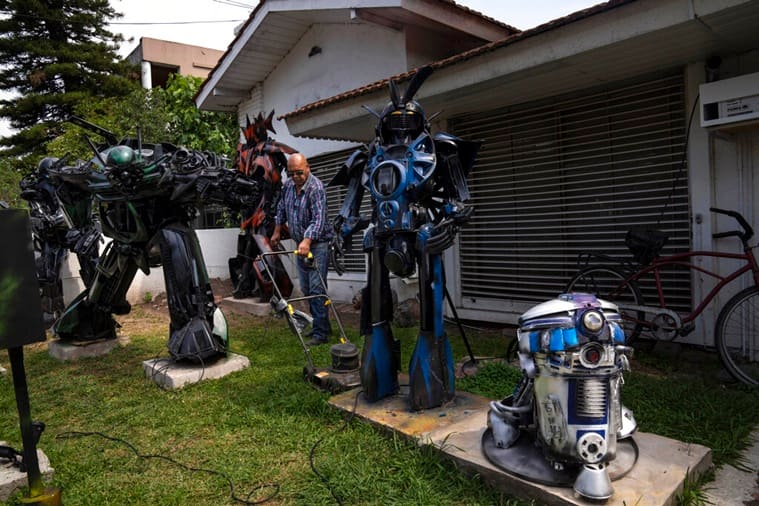 Those who are particularly fond of music from the 1950s, as well as a few… Read More »LB Women’s Club offers chance to dance the night away | Lifestyle